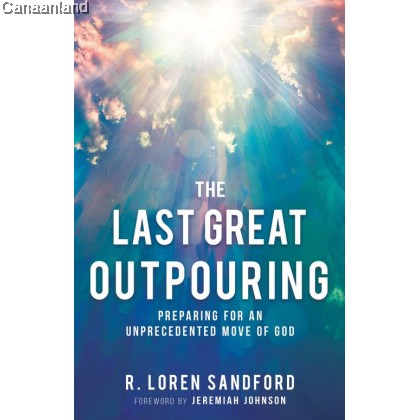 RM59.90
The Last Great Outpouring: Preparing for an Unprecedented Move of God

Description
After four hundred years of prophetic silence, God sent John the Baptist to announce the coming of the Messiah, the baptism He would bring, and the in-breaking of the kingdom of God on earth. In response, people streamed to the Jordan River to hear John’s words and be baptized by him in the Jewish ritual mikveh bath for cleansing from sin and defilement. John’s calling was to prepare the people for the coming glory.
Our God is nothing if not consistent—the same yesterday, today and forever. As in the days leading to the return of Jesus, He therefore continues to send messengers in advance to announce coming moves of the Spirit in order to prepare His people to receive. Author R. Loren Sandford believes God is about to do something huge, wonderful, and even unprecedented in scope and impact, and he is urging Christians everywhere to prepare for it.
Beginning with the prophet Haggai and moving through the Bible, Loren lays a foundation for his belief that the time of the last great outpouring and the Lord’s return is now.
He writes, “The church in our day has been ravaged and diminished in influence under pressure from the idolatrous culture that surrounds us and that, figuratively speaking, a remnant is even now returning from exile. It’s time to rebuild on a biblical foundation and construct a temple adequate to contain the outpouring God is about to send.”
Loren says we must reject our present culture, which is steeped in consumerism and a focus on self, and return to a culture of covenant. The former has weakened and destroyed us, while the latter will edify and strengthen us.
As John the Baptist came in the spirit and power of Elijah to prepare the way, prophetic voices are now rising to proclaim that the greatest outpouring of the Holy Spirit in history is coming. The great last days’ move of God approaches and the call for preparation now is the same as John preached so long ago. Through reliable prophetic voices, God now cries for holiness and cleansing to uproot everything in ourselves and in our churches not solidly rooted in the nature of Jesus and the Father.

R. Loren Sandford grew up a preacher’s son in the Congregational Church in Illinois, Kansas, and north Idaho. As a teenager, he played rock music professionally over three states and two provinces of Canada before leaving to attend the College of Idaho. In 1973, he completed a B.A. degree in music education, then moved to California and attended Fuller Theological Seminary in Pasadena, earning a Master of Divinity degree in 1976.
Since then, Loren has served four churches full time, successfully planting two of them himself, including New Song Church and Ministries in Denver, Colorado, where he remains the senior pastor. In 1979 and 1980, he co-directed Elijah House, an international ministry in Christian counseling and counselor training. Initially ordained in a mainline denomination, where he served on the national board for a charismatic renewal group, he has since served in the Vineyard (1988–92). Until 2013, he was affiliated with Partners in Harvest, a new association of churches associated with the Toronto Airport Christian Fellowship, now known as Catch the Fire Toronto, and the renewal centered there. He served for fourteen years as a member of the International Input Council for Partners in Harvest and oversaw the central western region for that family of churches.
Loren travels internationally, teaching and speaking for conferences in renewal churches and overseeing and advising ministries in various capacities. He serves as a prophetic advisor and board vice chairman for Elijah Rain Ministries.
In 1991, he was the worship leader for the first Promise Keepers mass men’s meeting at the CU Event Center in Boulder, Colorado. He has released seventeen albums of original music, most of it for worship. Loren has authored several books, including Understanding Prophetic People: Blessings and Problems with the Prophetic Gift; Purifying the Prophetic: Breaking Free from the Spirit of Self-Fulfillment; Visions of the Coming Days: What to Look for and How to Prepare; and The Micaiah Company: A Prophetic Reformation, coauthored with Jeremiah Johnson.
Loren and his wife, Beth, have three grown children and several grandchildren. Loren is also a member of the Osage Nation, a Native American tribe centered in Oklahoma.
Reviews (0)
view all
back
0
0 reviews
Tags: BOOKS BCHAR WHITA WEB
Categories