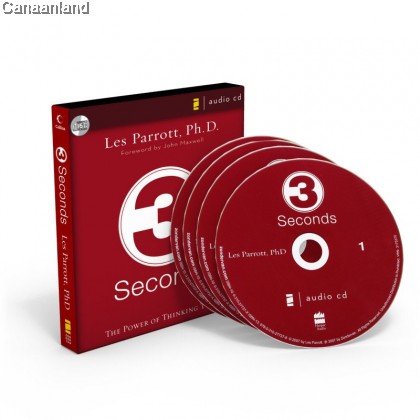 Description
Just three seconds. The time it takes to make a decision. That’s all that lies between settling for “Whatever” … or insisting on “Whatever it takes.” 3 Seconds shows how to unleash the inner resources that can move you to a whole new level of success. It comes down to six predictable impulses that most of us automatically accept without a second thought. You can replace them with new impulses that lead toward impact and significance. \For instance, it takes Three Seconds to … Disown Your Helplessness: The First Impulse: “There’s nothing I can do about it.” The Second Impulse: “I can’t do everything, but I can do something.” Quit Stewing and Start Doing: The First Impulse: “Someday I’m going to do that.” The Second Impulse: “I’m diving in … starting today.” Fuel Your Passion: The First Impulse: “I’ll do what happens to come my way.” The Second Impulse: “I’ll do what I’m designed to do.” Inhale … exhale ... the difference of your lifetime can begin in the space of a single breath. The decision is yours. Start today.\Author: No. 1 New York Times bestselling author and psychologist Dr. Les Parrott has been featured on Oprah, CBS This Morning, Today, CNN, Fox News, and The View, and in USA Today and the New York Times. Dr. Parrott's books, often coauthored with his wife, Dr. Leslie Parrott, have sold more than three million copies and have been translated into more than thirty languages. He is the creator of three revolutionary relationship assessments: SYMBIS.com, DeepLoveAssessment.com, and Yada.com. Dr. Parrott and his wife, Leslie, live in Seattle with their two sons. \Les Parrott
Reviews (0)
view all
back
0
0 reviews
Tags: BOOKS AUDIO ZONDE WEB
Categories